Being involved in the firearms industry is one of the greatest experiences a “gun guy” can have. So to start off this blog post I want to say thank you to everyone who has given me the opportunity to beat up, break, torture, and abuse your products so frequently!

Primary Arms
This company has been turning a lot of heads across the industry over the last few years, and rightfully so. A wicked scientist or some would say a Greek descendant of King Leonidas himself, has been dreaming up and engineering some of the most useful reticles to be seen on the market since the Dragunov PSO-1 hit the playing field. The ACSS or the “Advanced Combined Sighting System” combines bullet drop compensation, range estimation, wind, and moving target leads all into one easy to use and extremely effective system. Because of the increased popularity of repeating rifles and the need for sighting systems to be adequate for rapid engagement and precise shooting in kinetic environments, Primary Arms has emerged as a leading player in the carbine optic world.

DEKA-MIL
Although PA has been most notarized for the ACSS reticle and its many variants, I have had the pleasure of spending a good amount of time (roughly one full year) behind their Precision Riflescope offering in the Primary Arms Platinum series 6-30×56 rifle scope equipped with the DEKA-Mil reticle. The DEKA-Mil reticle is designed to aid in the application of precision rifle fire at long and extreme long distances. The reticle uses milliradian increments in easily distinguishable lines laid out in the scope to aid in range estimation, basic holdovers or holdunders, wind holds, and a repeatable and fine chevron tip to offer an infinite and exact aiming point that doesn’t cover the target.

Below is a table of the basic Technical features of the actual scope I was privileged to drag across God’s country over the last year.

The Platinum Series
I tested the 6-30X56 FFP DEKA AMS Platinum Series Riflescope. The scope is manufactured in Japan to Primary Arms specifications, carries extremely clear glass, and a robust turret mechanism. The glass is on par with most of the Japanese glass I have seen, which is saying it does far better than the Chinese knock-offs we are all aware of but doesn’t quite measure up to the crisp and clear Schott glass in the German precision riflescope variants. The glass in the Platinum Series riflescopes caries definite marks of quality as well as a very apparent emphasis on quality control. The image is clean from edge to edge on low magnification and this holds true until you reach about 25x magnification. Between 25-30x the image begins to gather a slight fuzz around the edges, but the sight picture remains clear. Parallax on the Platinum Series Riflescope seems to work extremely well from 0-800 yards. Beyond 800 yards I ran out of parallax adjustment that would focus to my eyes, but everyone’s eyes are different. This seemed a little bit quick compared to most modern scopes used for long-range precision applications, however, for the incredible price point of this optic, it is an easily overlooked trait. Tracking was also on par with a very consistent sub 10% error margin throughout the boasted 27.6 mils of elevation travel. The body of the scope, although not particularly heavy, seems to be extremely robust and has held up very well for me through a multitude of different climates and extreme weather scenarios.

Thoughts on the Reticle
The reticle is very unique to Primary Arms style of a chevron tip center and bold markings for a specific purpose. My personal preferences lean towards a clean and more basic reticle, however, after using the DEKA-Mil for a year now I can admit, IT WORKS. It took me some time to get used to, having had so much time on traditionally designed reticles, my brain did not want to adapt at first. Once, I got over the mental hump of seeing an image I wasn’t used to, I began to really respect the thought and time that went into developing this reticle. I was able to repeatedly mil targets at distances far greater than I thought would be achievable with great success. I used this scope in a few different precision rifle competitions, to include the Guardian Long Range competition at Alabama Precision this summer.

Competition
The optic was truly a great selection for competition shooting. The design of the Deka-Mil and the bracketing features for wind hold off on the subtensions made small adjustments on steel very quick and easy. The turrets held up to the high volume of fire and I never lost zero or had any sort of shift due to impact jarring or the abuse of throwing the rifle and optic around barricades. The course of fire at the Guardian Long Range Competition was complete with moving targets and the horizontal subtensions of the DEK-Mil made bracketing and trapping a mover extremely easy and consistent.

Final Thoughts
Honestly, guys, this optic is a steal! I was surprisingly impressed with the Primary Arms Platinum 6-30×56 Riflescope. I had my reservations about a “budget” optic and I refused to say a word about it until I had put it through a rigorous environment of testing that, honestly, was designed to make this scope fail. IT HAS NOT FAILED. I have beat it, dropped it, frozen it, swam with it, drug it across the ground, and it is still holding true and tracking consistently. I have taken this through precision rifle classes with REX Defense LLC, multiple competitions, put it through specific sniper training courses and drills, even a combat command fire course in west Texas with REX at the harsh but beautiful Hawks Double Mountain Ranch, and the scope just won’t quit. I have run it on big bore rifles, hard-hitting but lightweight magnum hunting rifles, AR-style platforms, and the Platinum is holding steady to the value implied by its name! It may not measure up to some of the 3k dollar plus tier one scopes available on the market, but it is in no way a budget riflescope. The optic is built on quality principals, with quality parts, and performs at a very high level. Don’t take my word for it though. Get out there and find the Solution that works best for you!

And remember, Accuracy is the Solution! “Send it”

Signup to get up to date information, deals, and community news 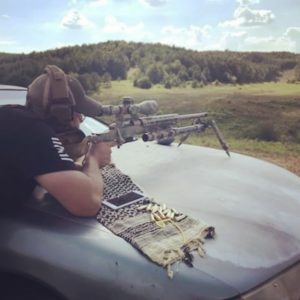 Why Should I Use A Bipod In The First Place?

3 Ways A Bipod Will Improve Your Hunting Skills